The mental health of new fathers is being overlooked despite evidence suggesting men might experience similar rates of depression to mothers after the birth of a child, experts have warned.

It is thought at least 10% of new mothers experience postnatal depression, although charities have said figures could be higher as surveys have shown many women do not seek help or are not asked about their mental health after having a baby.

But recent studies have suggested that new fathers might experience depression at similar rates, and that such depression might affect various developmental outcomes for children as is thought to be the case for new mothers with postnatal depression.

New fathers, however, are generally not screened for mental health problems, and a survey of about 450 new fathers in Sweden last year suggested the scale used to assess mothers for postpartum depression was not necessarily as accurate for men.

Speaking at the American Psychological Association convention, psychologists in the US have said that new fathers should be screened, as new mothers are supposed to be, for mental health problems.

“Fathers need to be seen as the partners that they are, and the family system is what needs to be assessed and treated any time there is a newborn coming into the home,” said Dr Sara Rosenquist, a psychologist based in North Carolina, adding that adoptive parents can also experience postnatal depression. Rosenquist added that men need access to suitable treatment if they have postnatal depression. 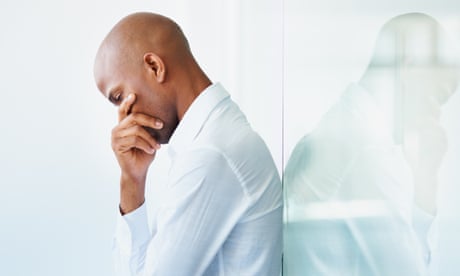 Can men get postnatal depression?

The call for new fathers to be screened for mental health problems has also been made in the UK. In November the campaign group Fathers Reaching Out addressed the House of Commons on the issue, led by founder Mark Williams who, alongside his wife, experienced postnatal depression.

Dr Andrew Mayers, an expert in perinatal mental health at Bournemouth University who is among those who have backed the campaign, said that while women can be diagnosed with peripartum depression – relating to the period around giving birth – there is no recognised equivalent diagnosis for men.

“We already know that there is growing evidence that men can experience very similar symptoms, call it what you will, to postnatal depression,” said Mayers, stressing that it is important as it appears to affect fathers’ interactions with their children.

A spokesperson for the National Institute for Health and Care Excellence (Nice) said that guidelines cover recognising, assessing and treating mental health problems in women who are planning to have a baby, are pregnant, or have had a baby or been pregnant in the past year.

There is scant reference to partners’ mental health, although in the case of traumatic births Nice advises “Take into account the effect of the birth or miscarriage on the partner and encourage them to accept support from family and friends.”

Mayers added that one issue is that postnatal depression is often discussed as a matter of hormones. “Postnatal depression itself is not entirely hormonal, not by a very long way. It is a small part, there are many other factors,” he said. “When people often talk about women and hormones and mental illness they are more likely to be thinking of what we call the baby blues – this happens to the vast majority of women in the first few days of having a baby and the mood will fluctuate dramatically and quite alarmingly in some cases but it tends to disappear.”

Postnatal depression, he said, is often longer-lasting, begins later, is more debilitating and is down to many factors. “Most of those are social-environmental factors, and many of those are common between men and women,” said Mayers, but he noted that different coping mechanisms, feelings about becoming a parent, and a shift in the relationship between partners might be among them. Mayers also noted that in men there is some evidence that testosterone levels change on becoming a father.

Rosenquist agreed that the emphasis on women’s hormones is misplaced. “I think it was originally well intended,” she said. “But it has backfired in many ways because now you have a convenient way of dismissing women’s emotions,” she said.

Mayers added that raising the mental health problems new fathers face is not about funnelling resources away from new mothers. “We are not saying that some of the funding that has been put aside for women also now needs to be put towards men – we want more money, we want more resources, we want a better understanding for what men are going through at this stage as well,” he said, noting that men are more likely to hide symptoms and internalise them due to social stigma. “And it is important – particularly these days when we should be seeing pregnancy, birthing and parenting as a partnership.”